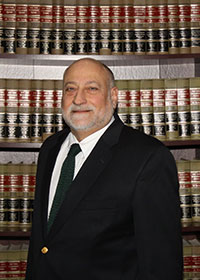 The 2016 Gael of the Year is New York State Court of Claims Judge Nicholas V. Midey Jr. Midey is a longtime supporter of the Syracuse St. Patrick’s Hunger Project and has worked behind the scenes for many years to improve the lives of people in our community.

He was born in Seneca Falls and graduated from Mynderse Academy. He and his wife of 40 years, Marie Louise Midey, have four children. Marie Louise Midey is a nurse practitioner at the Syracuse Veterans Administration Medical Center.

Midey has served on the New York State Court of Claims since 1995 and ranks as the judge with the longest tenure. Formerly, he was a partner with Midey & Midey, an assistant public defender in Seneca County and town attorney in Seneca Falls.

He has served on the Republican Committees for Seneca County and Seneca Falls. He is a member of the Rotary Club, former chair of the St. Patrick’s Church Thanksgiving Appeal, former co-chair of the Seneca County Heart Association Campaign, Seneca County Cancer Society fund solicitor, alumni interviewer for Georgetown University and religious education instructor at Immaculate Conception Parish in Fayetteville. He received an award from the Syracuse Families of South Sudan for outstanding contributions to their cause.