The Dedicated Volunteers Who Organize and Run Our Parade

Rose of Syracuse and Rosebuds

May God hold you in the palm of His hand.

Nancy Duffy, founder of the Syracuse St. Patrick’s Parade, was also one of the most honored journalists in Central New York and an active community leader. It all began with a meeting at Coleman’s Pub and Nancy’s desire to bring her Irish heritage and culture to the streets of Syracuse. Nancy didn’t’t really have a clue as to how to make a parade work but Nancy had plenty of Irish spirit and no one could say “NO” to her! So there it all began – and here we are still growing stronger every year – because of Nancy. Nancy still is and always will be the heart of our parade.

Aside from founding the parade, did you know that in her real career as a TV journalist, she was the only reporter allowed to remain in the Wounded Knee encampment during the American Indian Movement takeover? Quite a feat for a young, woman reporter from Syracuse!

A Watertown native, Nancy was a graduate of St. Mary’s Roman Catholic High School in Cortland and Marywood College in Scranton, PA. She launched her professional career as a newspaper reporter for the Cortland Standard after college, later joined the Syracuse Herald Journal. In 1967 she became the first female news broadcaster in Syracuse when she joined the staff of WHEN Radio & TV. 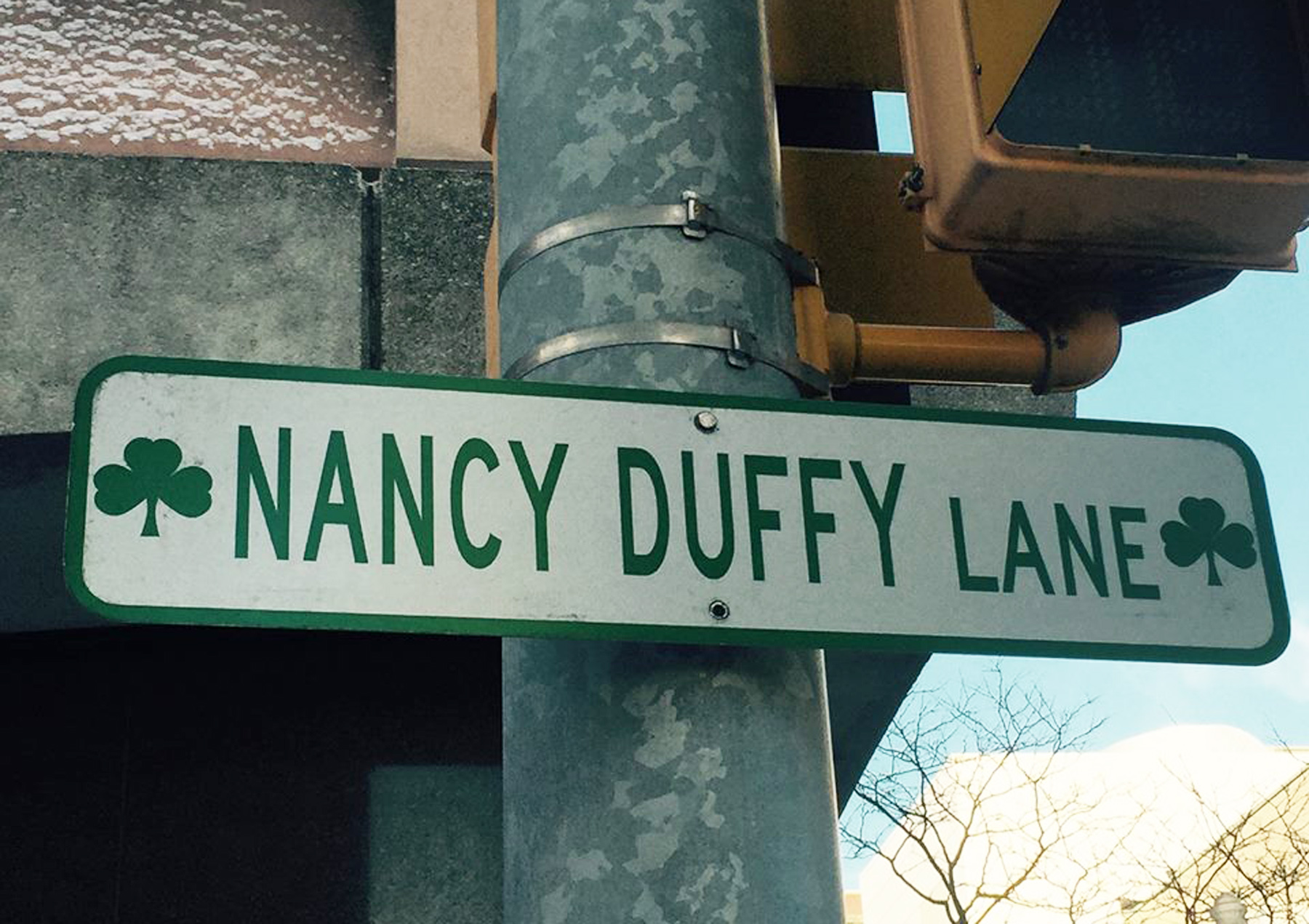 Nancy’s list of firsts is unsurpassed… First female reporter in a Syracuse University locker room… First woman named Press Secretary to the mayor of Syracuse… First Downtown Award of Excellence in the Media… First class of inductees named to the Syracuse Press Club’s Wall of Distinction… Organizer of the first Baseball Hall of Fame parade in 50 years at Cooperstown.

Nancy was a founder and devoted member of the Syracuse James Joyce Club of the CNY chapter of the Irish American Cultural Institute. She was a co-organizer of the “Save Our Symphony” campaign, and sat on the Syracuse Symphony Orchestra board for five years. She was associated with the Muscular Dystrophy Association as telethon co-host and volunteer for more than 20 years. She taught courses at Syracuse University’s Newhouse School of Public Communications and University College. She was involved in the Empire State Games, the Syracuse Rotary Club, and the Onondaga County Traffic Board.

An accomplished artist, Nancy’s portraits of Native American people and traditions have been shown in galleries and public spaces throughout the region. Despite all these accolades and awards, Nancy’s finest (and favorite) achievements were her sons, Matthew, an attorney, and Peter, a journalist and author, and two adorable grandchildren.