Syracuse’s 40th Anniversary St. Patrick’s Parade will set off on March 12th. The theme of the 2022 St. Patrick’s Parade is “Dance Through Downtown” and celebrates the community coming together for the parade for the first time since 2019. In keeping with this theme, the 40th Anniversary Parade will start with a collective dance performed by hundreds of local Irish step dancers. 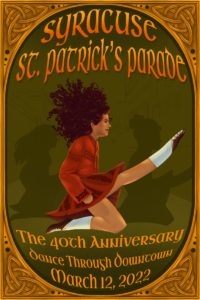 The St. Patrick’s Parade will celebrate honorees who have been on hold since the cancellation of the parade in 2020. Grand Marshals are Sean Kirst and John Francis McCarthy. The Gael of the Year is John Tumino.

Sean Kirst is an award-winning journalist who has been writing in Upstate New York for more than 45 years. He is currently writer-in-residence at Le Moyne College and a columnist with The Buffalo News. A Native of Buffalo, NY, Kirst worked at Syracuse newspapers for 27 years, most of that time as a columnist for The Post-Standard. He is the recipient of many journalism awards, including the Ernie Pyle Award, given annually to one American journalist for writing about the dreams and struggles of everyday people. Kirst’s The Soul of Central New York, a collection of stories and observations about greater Syracuse published in 2016, became the fastest-selling book in the 76-year history of the Syracuse University Press.

John Francis McCarthy is a renowned photographer and Tipperary Hill native. McCarthy’s photography of the Finger Lakes spans across five decades; he is particularly well known for his stunning landscape photography in the CNY region and Ireland. McCarthy’s photography has been included in juried shows, museums and other venues including Utah’s Bountiful Art Center, the National Press Club, Washington, D.C, LeMoyne College, Schweinfurth Museum, Auburn, Image City, Rochester and to complement a visit from Irish writer Frank McCourt in Oswego.

The Parade will also recognize John Tumino as Gael of the Year. Tumino is the founder of In My Father’s Kitchen, a nonprofit that assists people who are homeless through direct street outreach. In My Father’s Kitchen launched a new initiative, “Hire Ground,” which is a day labor program that provides people who are homeless with temporary jobs as an alternative to panhandling.

The Parade is embarking on the 15th year of the St. Patrick Hunger Project. The Hunger Project raises funds and collects food for local food pantries to fight hunger in CNY. To date, the Hunger Project has provided over 895,000 meals for children and families in the community.

The parade will begin at 12 p.m. on March 12, marching through downtown Syracuse along Nancy Duffy Lane (South Salina Street).