Syracuse’s 37th St. Patrick’s Parade will set off on March 16th, 2019, with Co-Grand Marshals Joanie Mahoney and Bernard Mahoney. The Gael of the Year is Casey Vanderstouw. Details on the theme and honorees are below. Applications to march in the Parade will be accepted starting January 1st and are due by February 22nd. 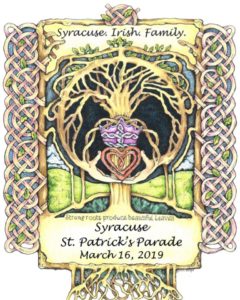 The 37th annual Syracuse St. Patrick’s Parade is returning to its roots with “Syracuse. Irish. Family.” On March 16, 2019, the Parade will celebrate these three things that our community takes pride in: the bonds of family and friendship, our cultural heritage, and the great city of Syracuse! The trio echoes the ideals represented by the Irish Claddagh of love, loyalty and friendship.

Joanie Mahoney is the fifth of Bernie and Joanne Mahoney’s nine children and a member of the fourth generation of Mahoneys who originally came from County Kerry in the mid 1800s. Joanie grew up in the Strathmore home where her parents still reside today and she graduated from Corcoran High School, Syracuse University’s School of Management and S.U.’s College of Law. 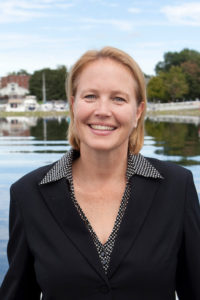 After spending time in private practice, Joanie worked for five years in the District Attorney’s Office before being elected Councilor-at-Large in the City of Syracuse where she served a four year term. In 2007 Joanie was elected Onondaga County’s first female County Executive where she served 11 years.

In 1994 Joanie married Marcus Overdyk who grew up in the Valley section of Syracuse and also graduated from Corcoran High School before he headed off to college in Illinois.

Joanie and Marc now have four sons and reside in the town of Dewitt. Joanie has very fond memories of the Saint Patrick’s Day Parade. She began attending with friends and family in the 1980s and has enjoyed it many times with her own children since then. Joanie is honored to be Co-Grand Marshall with her father as the whole community celebrates Family.

Bernie Mahoney has a proud Irish heritage. In the mid 1800’s, Bernie’s great-grandfather Richard Mahoney emigrated from County Kerry in Ireland and settled in Jordan, New York. Bernie’s father, Bernard Arthur Mahoney was born and raised in a house in Jordan that stayed in the Mahoney family for over 100 years. The house in Jordan is where generations of Mahoneys gathered for family events. In 1929 Bernie’s father married Mable Rolfe from Auburn, NY and Bernie is the second of their four children. 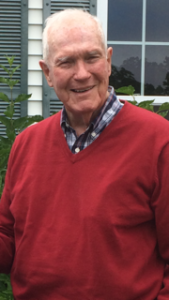 Bernie Mahoney was raised in the Valley section of Syracuse and attended St. Anthony’s school before graduating from Christian Brothers Academy. After attending Niagara University, Bernie was drafted into the Army and spent the next couple of years in Fairbanks Alaska, a place he returned to many times over the years.

Bernie came back from the Army and graduated from Le Moyne College and went to work selling computers for IBM in the late 1950s. In 1959, Bernie married Joanne Goodsell who grew up in the house next door to him. In 1969 Bernie graduated from Syracuse University’s College of Law.

Bernie owned and operated his own computer leasing business and spent many years in public service; first as a City Councilor in Syracuse and then in the New York State Assembly. Bernie and his daughter Joanie are proud Co-Grand Marshals of the Saint Patrick’s Day Parade and will be marching with dozens of children and grandchildren as the whole community celebrates Family. 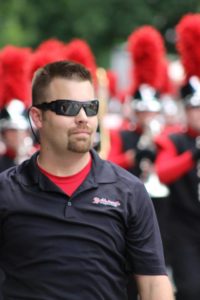 Under his direction, the Baldwinsville Marching Band has enjoyed numerous accolades. In 2014 his band performed in the prestigious 88th annual Macy’s Thanksgiving Day Parade. His band has just been selected to perform in the Tournament of Roses Parade in Pasadena, California on January 1 st , 2020. His bands have won multiple New York State Championships and have performed for the New York Jets and Buffalo Bills. The band
just returned from a successful competition and recording session in Nashville, Tennessee, and achieved their highest championship score in program history for the third consecutive year. In 2016 the Bees were chosen to head the Macy’s Christmas Parade at Universal Studios, Florida and also performed at halftime of the Russell Athletic Bowl. In 2012, the band won the Gator Bowl Field Band and Parade Band competitions in Jacksonville,
Florida. The band also performed as overnight guests at the Kennedy Space Center at Cape Canaveral, Florida.

In 2010 the Baldwinsville Marching Band won the USSBA Maryland/Delaware State Field Band Championships in Towson, Maryland. In 2009 the band performed a salute to military veterans onboard the USS Intrepid in Manhattan, NY. In addition, Mr. Vanderstouw founded the ‘Plan Bee’ Pep Band at Baldwinsville in 2009. This group has been featured in numerous television appearances and sporting events throughout the Syracuse, NY area. To celebrate the tenth anniversary of the band, they are hosting a release party for their first-ever vinyl record at the Palace Theater in Syracuse on January 19, 2019. In addition to proudly performing in the annual Syracuse St. Patrick’s Parade, the Baldwinsville Marching Band also has an open invitation to perform in the St. Patrick’s Parade in Dublin, Ireland.

Prior to his position in Baldwinsville, Mr. Vanderstouw was the Director of Bands in Wellsville, NY. In 2008 the Wellsville Marching Band completed the first-ever undefeated field band season in the 22-year history of the program. Mr. Vanderstouw has also worked with marching bands and drumline ensembles in the Cicero-North Syracuse and Moravia school districts.

Mr. Vanderstouw loves providing new performance opportunities for his students, and greatly values his role in helping them achieve success as musicians and as citizens.